The sheer number of fish oil studies makes it hard to tell if supplementation helps heart health. A recent meta-analysis looked at only the largest randomized trials, and found no benefit.

This page features 20 references. All factual claims are followed by specifically-applicable references. Click here to see the full set of references for this page. 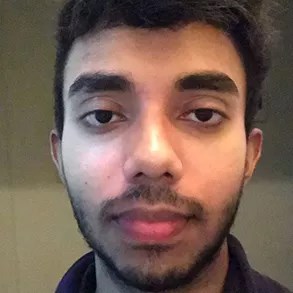 An analysis of Associations of Omega-3 Fatty Acid Supplement Use With Cardiovascular Disease Risks: Meta-analysis of 10 Trials Involving 77 917 Individuals.

In 2015, 17.9 million deaths were caused by cardiovascular diseases (CVDs)[1], which include coronary heart disease, angina, heart attacks, strokes, and heart failure. The most common age group to suffer from CVD are older adults over the age of 60[2].

The strongest risk factors for CVD include high blood pressure, high cholesterol, smoking, diabetes, lack of physical activity, obesity, and poor nutrition. Thus, many events that result from CVD are largely preventable through lifestyle[3]. When it comes to nutrition, government agencies and organizations have promoted the consumption of unrefined plants and discouraged excessive consumption of foods and drinks high in fats, sugars, salt, and alcohol.

Fish and fish oil consumption, in particular, has a long history linking it to CVD prevention, which is summarized in Figure 1. The story started, in part, due to observational evidence suggesting that fish consumption was associated with a reduced risk of cardiovascular disease[4], which led to randomized trials investigating the effects of fish oil on CVD outcomes.

Several RCTs conducted after this statement found conflicting evidence of fish oil supplementation improving fatal or even nonfatal CVD outcomes[6]. In 2016, the AHA formed an advisory group to perform another review of all the RCTs available at the time and concluded that despite there being controversial evidence, the AHA believed that fish oil supplementation was beneficial for people who recently experienced a cardiac event[7].

However, this review performed by the AHA was not a quantitative analysis of all the published data. The meta-analysis under review decided to look at the largest controlled trials published to objectively review the relationship between fish oil supplementation and CVD outcomes and to end the confusion around fish oil.

CVD is the leading cause of death worldwide and is sometimes preventable through lifestyle changes. Several researchers and organizations have been interested in the effects of fish oil on CVD outcomes but have found conflicting evidence. The meta-analysis under review re-evaluated some of the largest trials on the topic, and assessed the relationship between fish oil supplementation and CVD outcomes.

Who and what was studied

This meta-analysis was conducted to quantify the effects of omega-3 fatty acid supplementation on fatal coronary heart disease (CHD), nonfatal heart attacks, stroke, major vascular events, and all-cause mortality. For a clinical trial to be included, it had to compare omega-3 supplements to a control, it had to have a minimum of 500 participants, and it had to be at least one year long.

Some major characteristics of the included studies are shown in Figure 2. The review included 10 trials with a total of 77,917 participants, with sample sizes ranging from 563 to 18,645 participants in individual trials. The average age of the participants was 64 years and 61.4% (47,803) of them were men. Nearly two-thirds of participants had a medical history of CHD, one-third experienced a prior stroke, and more than one-third had a history of diabetes. 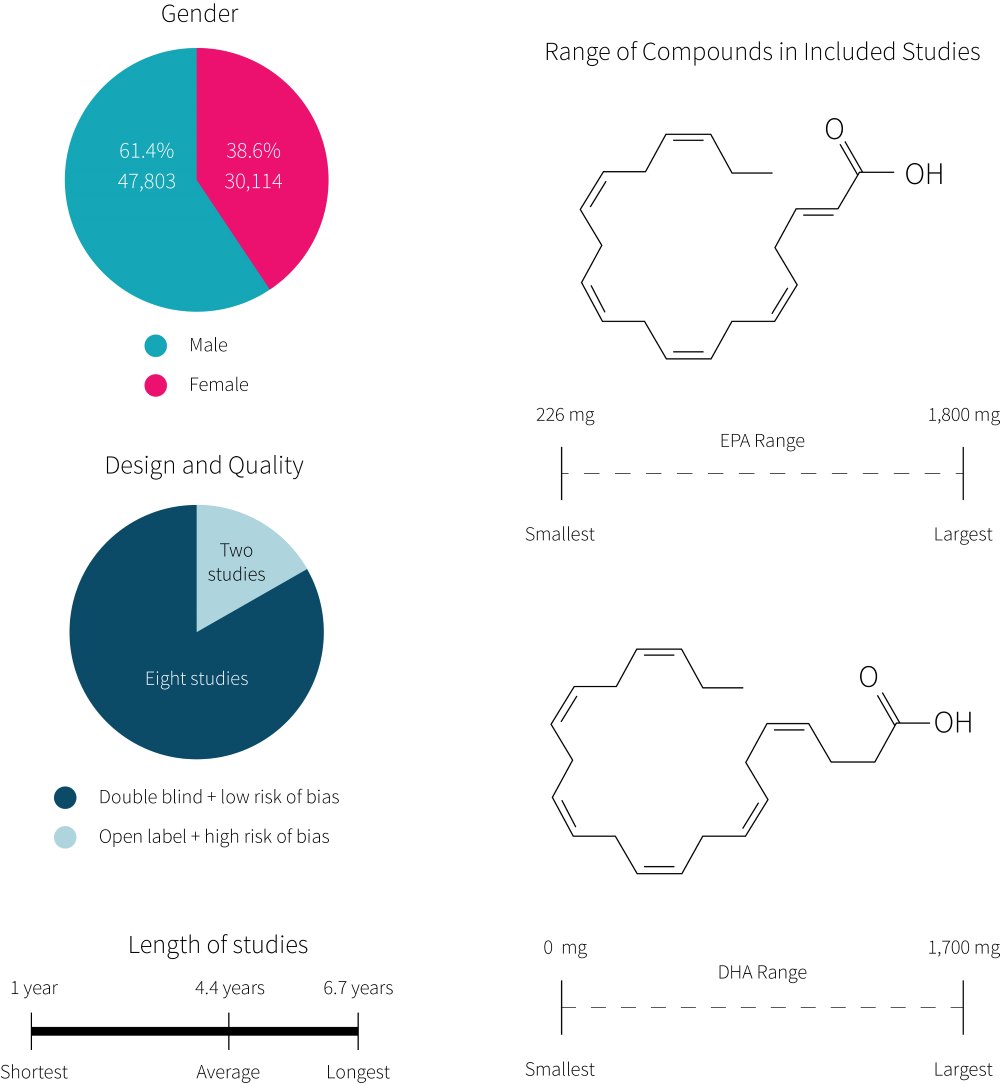 The average length of the included trials was 4.4 years with individual trial lengths ranging from one to six years. Of the ten trials, eight were double-blinded, placebo-controlled trials and two were open label, where the participants knew which treatment they were getting. Most of the trials were at low risk of bias, which are systematic errors that lead to inaccurate results. For example, the studies that were open label were at higher risk of bias because they were not blinded.

Subgroup analyses (specified in the preregistration protocol) were run to determine associations between the primary outcomes and variables such as age, sex, prior CHD, prior stroke, prior diabetes, blood lipids, prior use of statins, and trial design (open-label or blinded). Because they were testing several models, the authors adjusted for multiple comparisons.

This meta-analysis of 10 randomized controlled trials included 77,917 participants and explored the associations between EPA and DHA supplementation and several cardiovascular disease outcomes, such as fatal CHD, nonfatal heart attacks, stroke, and several other variables over the course of one to six years.

What were the findings?

The analyses found that supplementation with omega-3 fatty acids for an average of 4.4 years had no significant effect on either of death from CHD, non-fatal heart attacks, stroke, revascularization events, or any major vascular events.

Subgroup analyses found no correlation between any of the primary outcomes and variables, such as age, sex, prior CHD, prior stroke, prior diabetes, blood lipids, prior use of statins, and trial design (open-label or blinded). However, there were notable differences in the effects between the open-label trials and the double-blinded trials when it came to CHD events.

What does the study really tell us?

The results of this large meta-analysis suggest that omega-3 fatty acid supplementation does not seem to have a beneficial effect on fatal CHD, nonfatal heart attacks, stroke, major vascular events, and all-cause mortality. None of the pooled results showed any significant associations with supplementation.

One strength of this meta-analysis is that it only included studies with large sample sizes, which increase the precision of the data and reduce the likelihood of false positives and negatives. Also, it only included studies that were at least a year long (which gives us a hint at long-term effects), and it only included trials that compared supplementation to some sort of control. Additionally, most of the included trials were at low risk of bias. This is particularly important because the purpose of a meta-analysis is to mimic a giant clinical trial, and larger sample sizes reduce random error (noise). However, large sample sizes cannot reduce the impact of systematic errors (bias). Only quality control can do this. Since most of the included studies were at low risk of bias, more confidence can be placed in the results of the study.

However, two of the included ten trials were open-label trials, while the rest were double-blinded. This is a potential source of bias, and these two studies were also rated as being at higher risk of bias than the other studies. The results for these potentially biased studies had averages that suggested benefits, but with large standard errors and wide uncertainty intervals (which should make us less confident in the average). On the other hand, the studies that were at low risk of bias, had smaller standard errors and narrower uncertainty intervals, and had smaller averages than the studies that were at higher risk of bias.

It is worth remembering that the participants that were included in this analysis were mainly older participants who had a history of cardiovascular disease. Thus, it may not necessarily represent the impact of fish oil supplementation in younger populations with no history of CVD.

This meta-analysis had several strengths, such as only including trials with large sample sizes, long durations, and control groups. It was also preregistered, providing more confidence that extra analyses weren’t run for the sake of finding significant associations.

The relationship between omega-3 fatty acids and cardiovascular disease has always been controversial. Several guidelines have been put forth to promote fish oil supplementation for the sake of heart health, citing observational studies and favorable randomized trials, despite contradicting evidence from other large trials[8].

It’s always worth remembering that while observational studies can study samples in a more natural manner, they cannot always account for confounding variables and phenomena like regression toward the mean[9]. Clinical trials do a better job of tackling these issues with randomization and a control group. Therefore, it’s possible that some of these observational studies may have overestimated the effects of fish consumption and/or fish may have another nutrient in it that has a favorable impact on CVD outcomes[10].

Though it is understandable why some agencies and researchers have latched on to the idea that fish oil may have beneficial effects on CHD outcomes, from a mechanistic perspective, omega-3 fatty acid consumption seems to suppress inflammation[11] and it is well established that inflammation plays a large role in the development of cardiovascular disease[12].

So, fish oil may not be a useless supplement. A previous review in NERD #15, Volume 1 found a small to moderate effect on mood (albeit with low-quality evidence). And, it’s well established that fish oil reduces triglyceride levels[13][14].

However, it’s clear from this study that fish oil supplementation, in older adults with a history of or high risk for CVD, does not have a beneficial effect on CVD outcomes. Fish consumption, on the other hand, may have a beneficial impact, although observational evidence is mixed[15][16]. This is an area that will require far more research, as most interventional research to date has examined surrogate markers[17] as opposed to hard endpoints, like the study under review did. Also, there are some interventions that likely lower CVD risk which are shown in Figure 3. But, this study provides evidence that fish oil at these doses may not be one of those interventions. 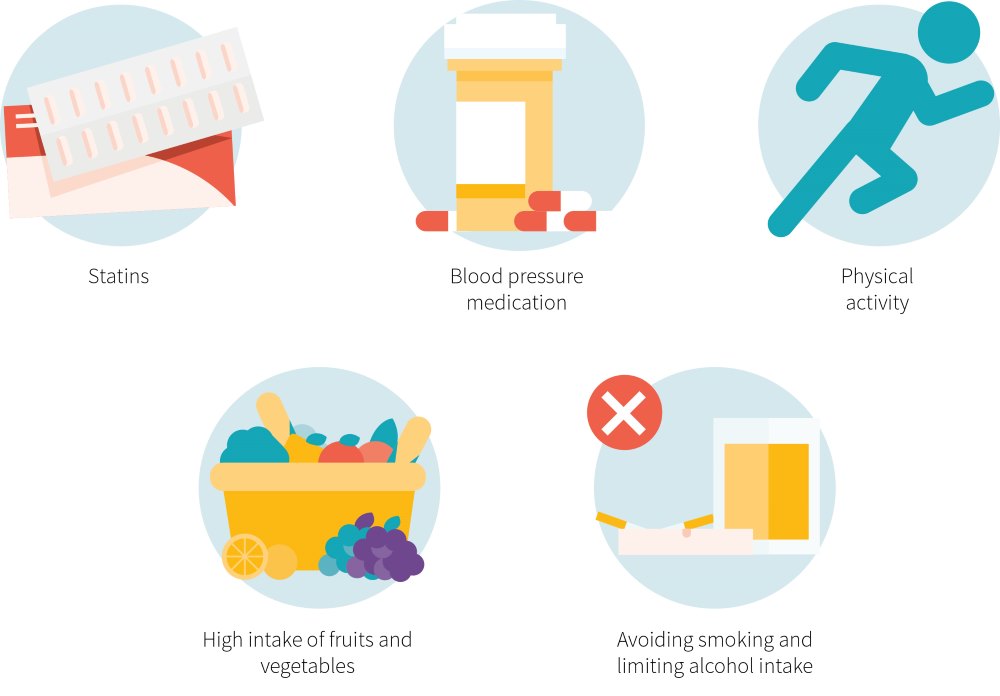 Could the low doses of fish oil used in the trial be a reason why there was no effect found?

This is a possible reason as to why there was no beneficial effect, and two trials (the STRENGTH and REDUCE-IT trials) are currently underway, where the effects of much higher doses of fish oil (3-4 g/d of EPA) are being studied. The results of these studies should give us some idea of whether fish oil has any utility with regard to cardiovascular disease outcomes.

Was the fish oil that was used for these studies included in the review oxidized?

Whether the fish oil products used in these trials were oxidized is a difficult question to answer, but it is worth noting that fish oil oxidation is a known problem and studies conducted in North America[18], New Zealand[19], and South Africa[20] have found byproducts of oxidation that generally exceed recommended levels in many over-the-counter supplements. However, the effects of these byproducts on human health is currently unknown due to a lack of data. Thus, it is difficult to speculate whether this could be a possible contributor as to why there was no effect.

What should I know?

You are now following Does fish oil actually help heart health?. You will be notified when any significant update is made.

This page features 20 references. All factual claims are followed by specifically-applicable references. Click here to see the full set of references for this page.